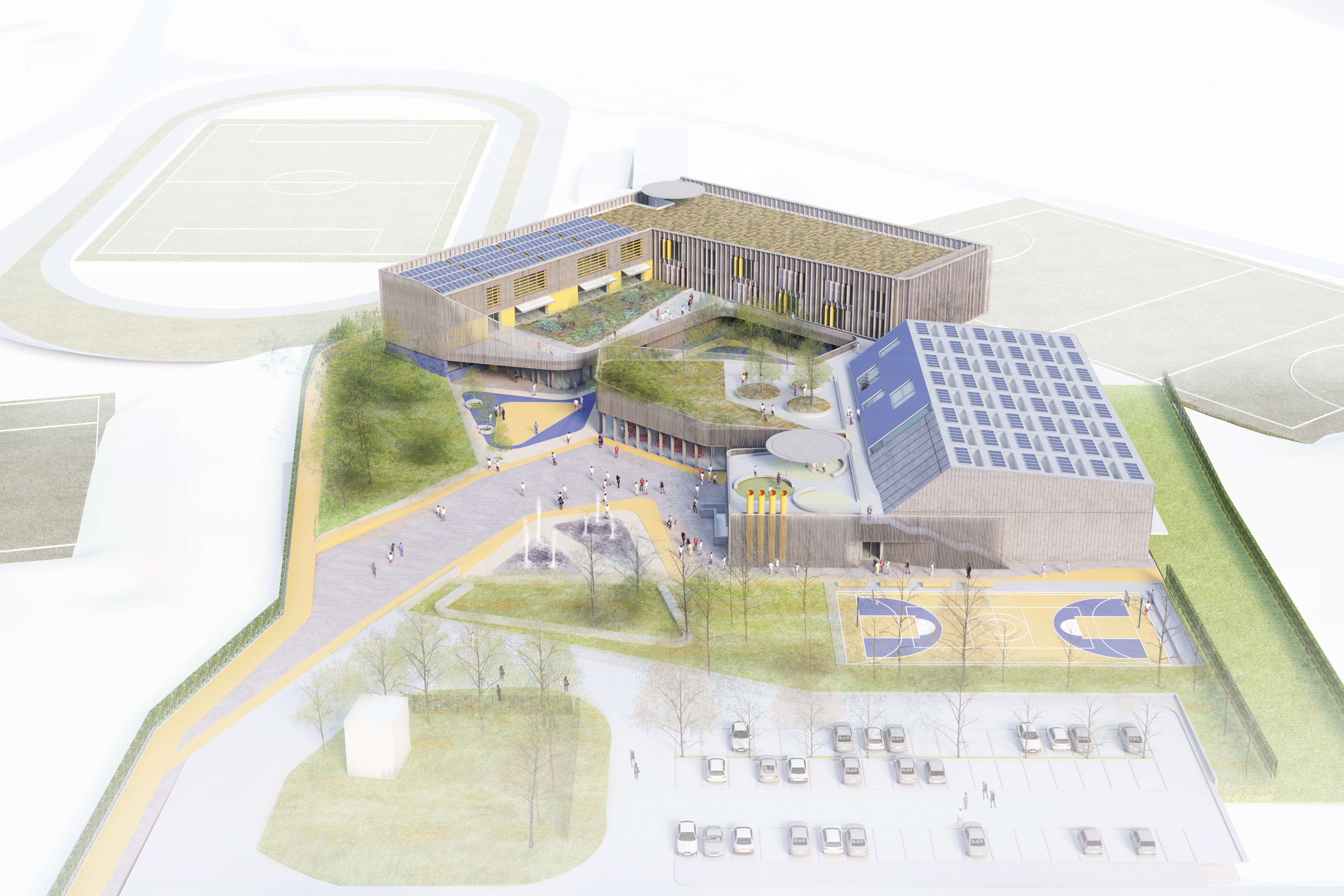 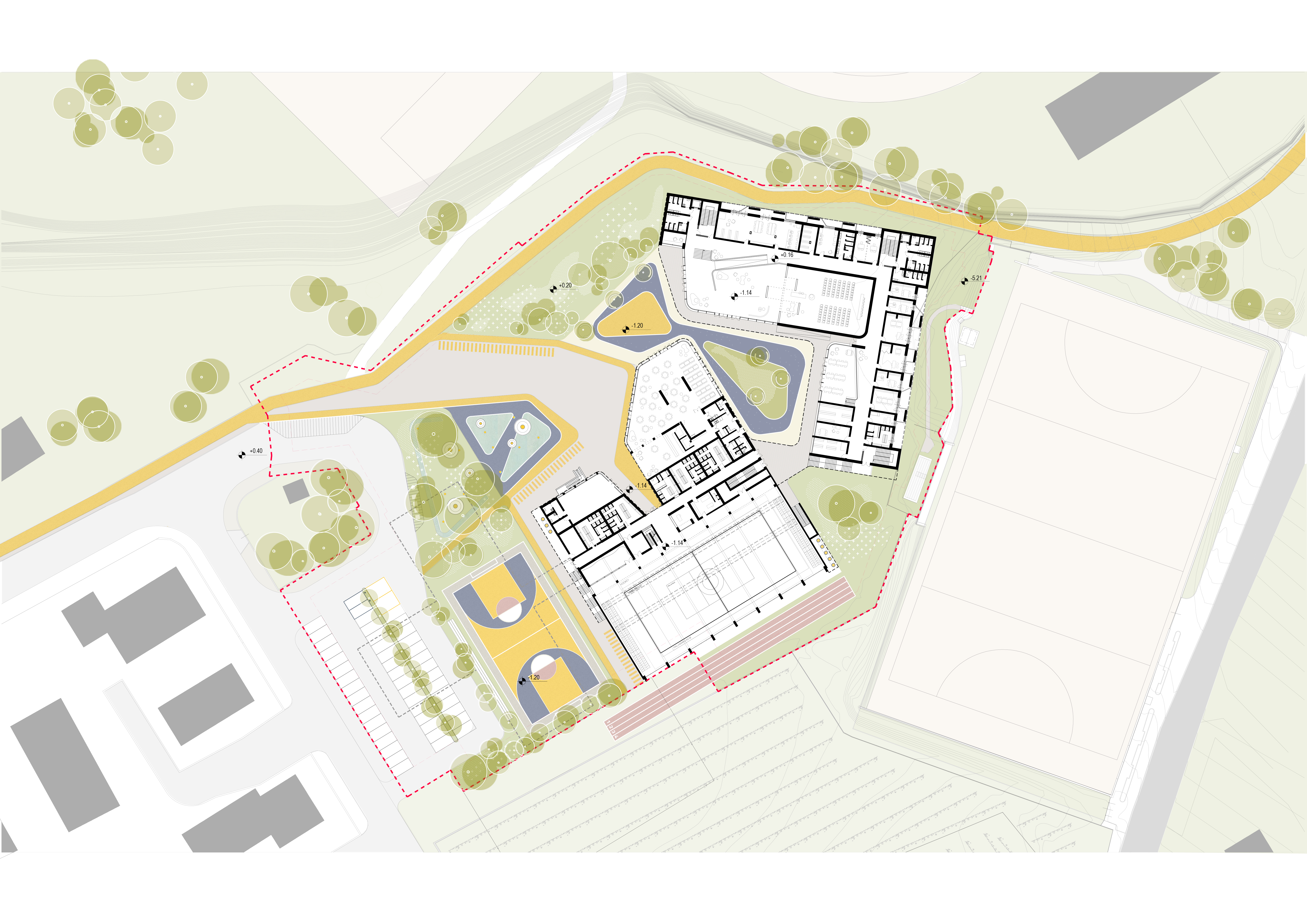 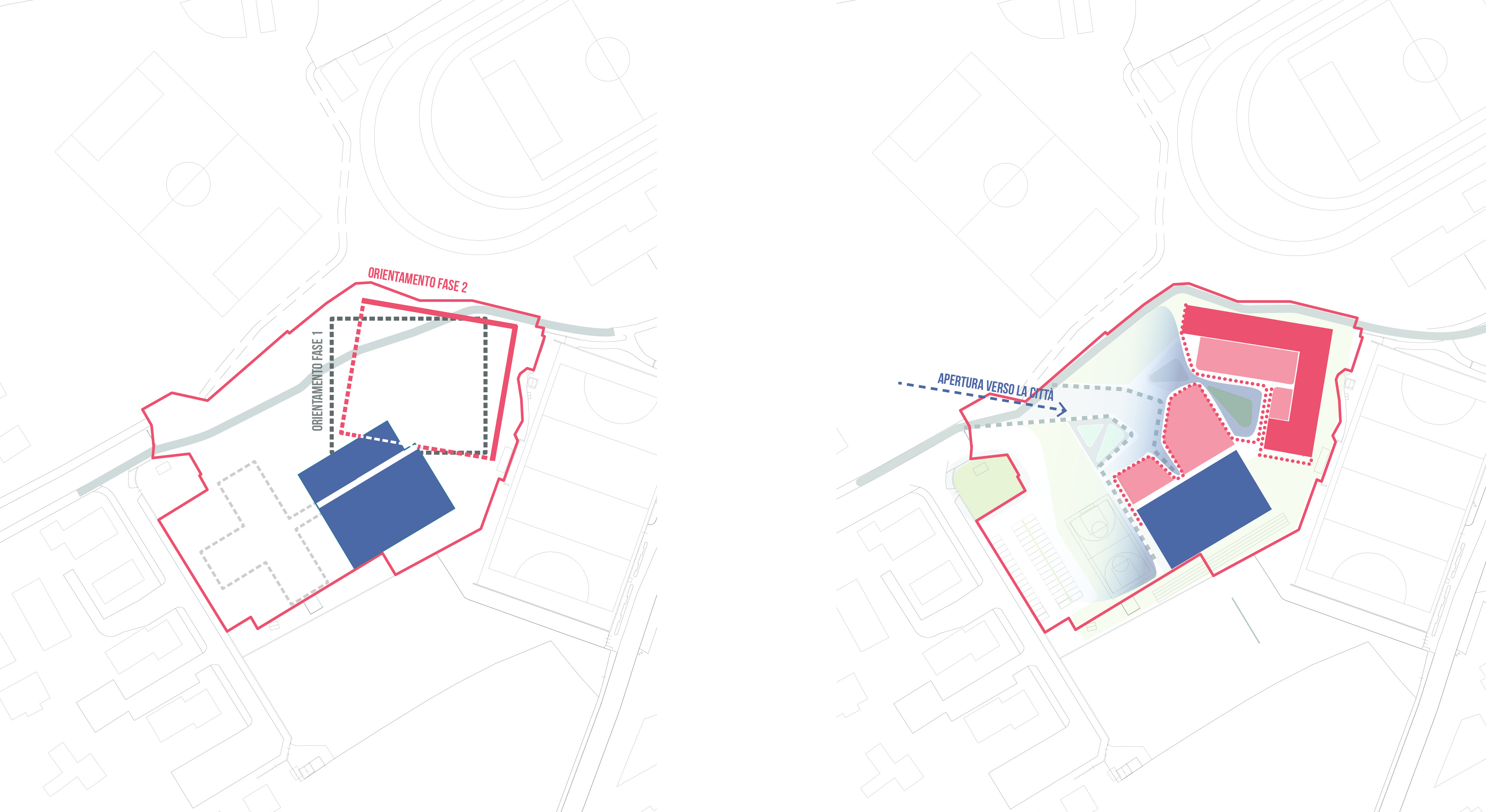 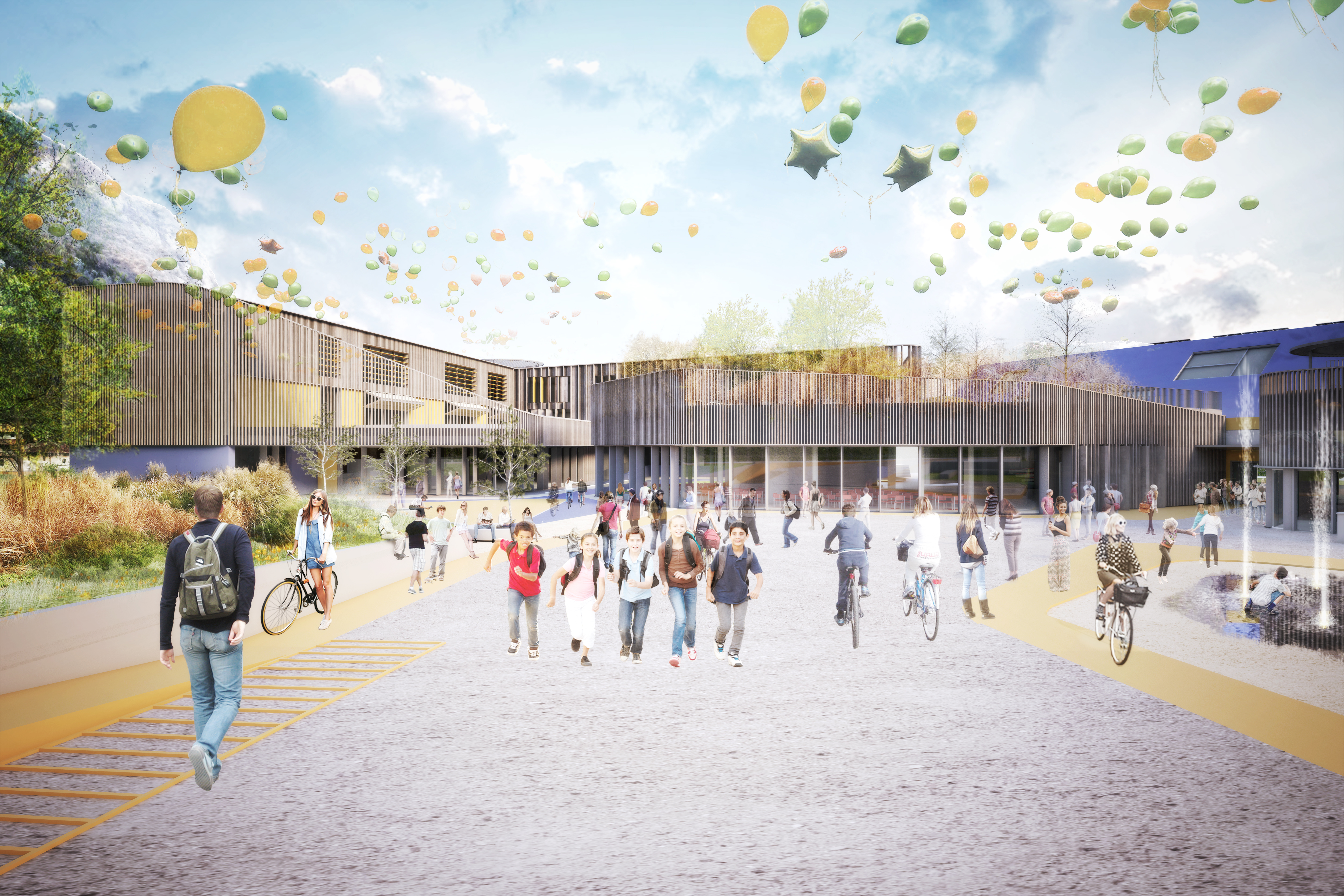 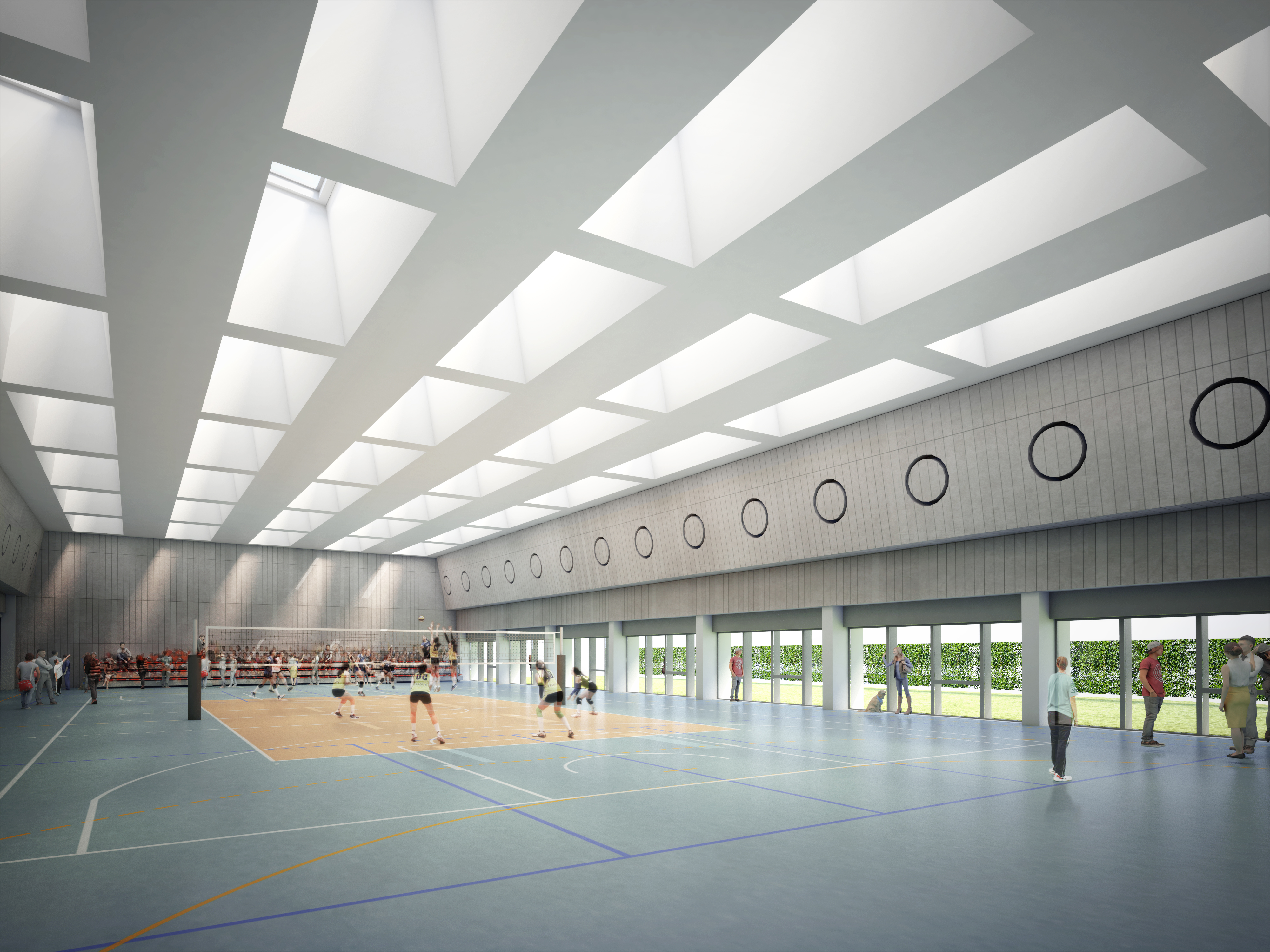 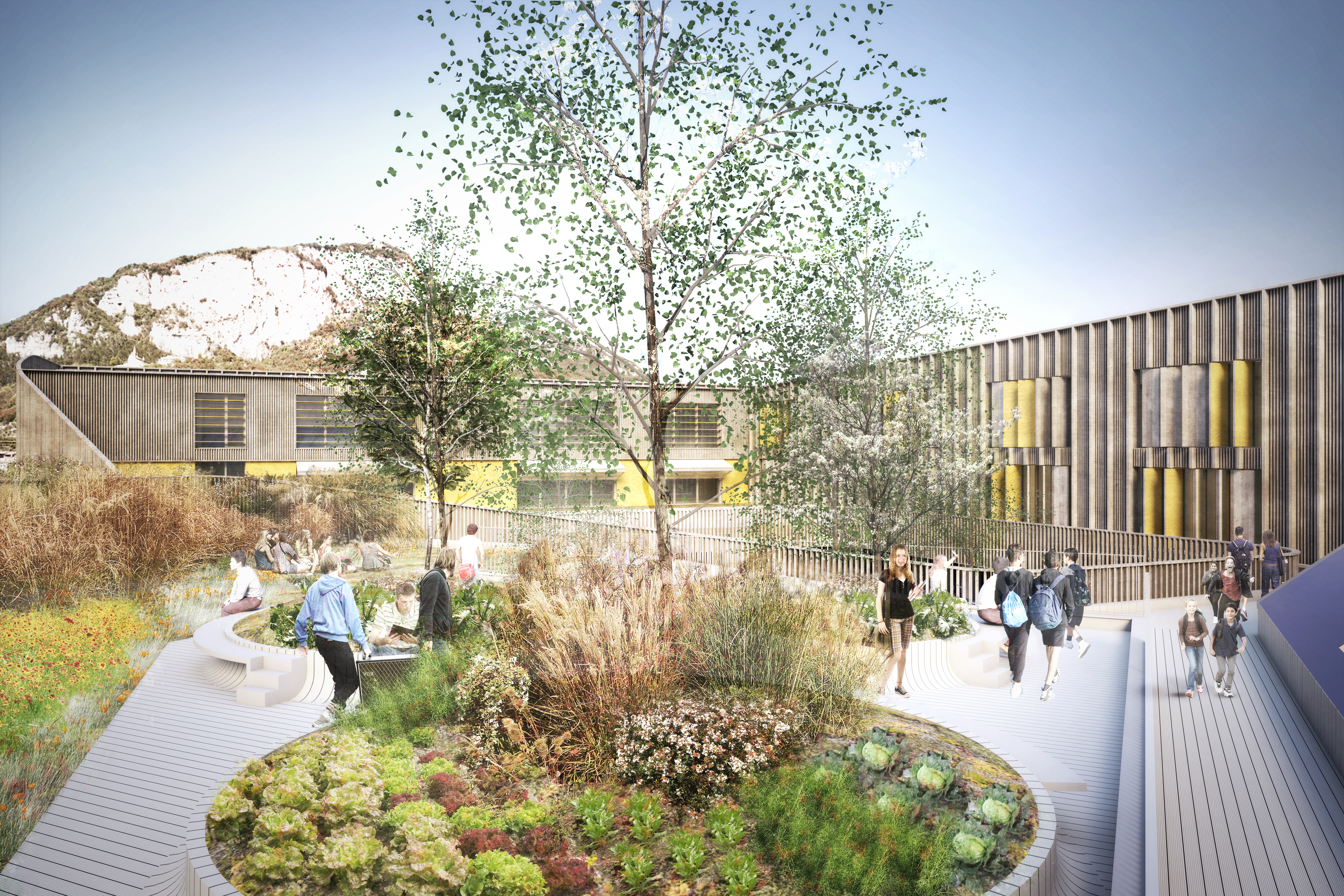 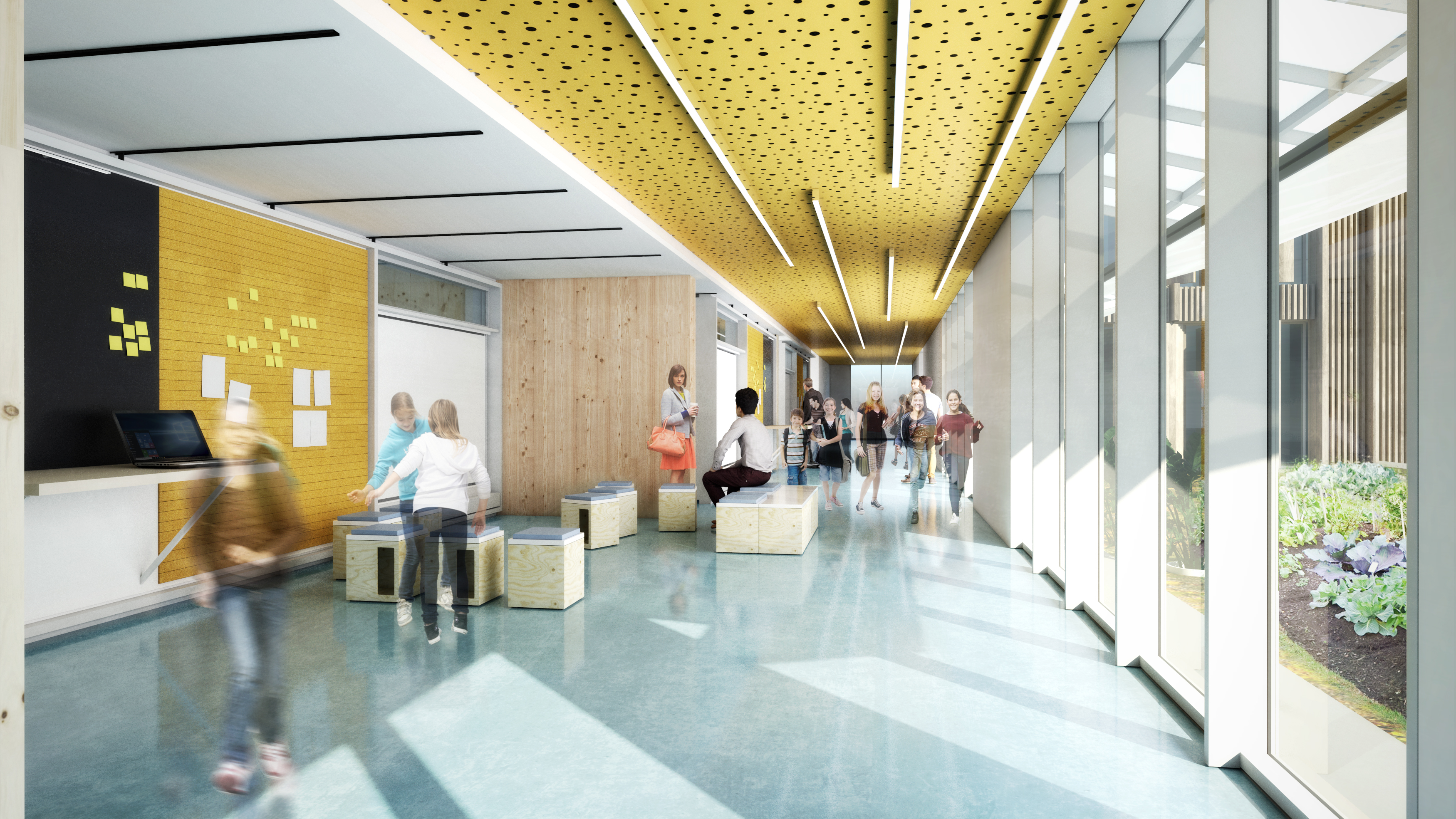 TERRITORIAL RELATIONS
The school complex of Mori is located in a prominent position above the historic town, is connected by a bike path to one of the main tourist facilities in Italy, the Ciclopista del Sole, and is central to an important complex of sports facilities.
These three characteristics of the context have led us to think about how to integrate the civic role of the school, with the values of learning and sports education.

URBAN AND SOCIAL RELATIONS
The school as a place where citizenship is formed acts in two directions: inside, as a social condenser, a place of exchange and training of the community of students and teachers, outside as a civic center, or place open to citizenship and, during closing hours, fully available for civic and cultural use.
The educational and inclusive objective of the project takes shape through a number of themes that, at different scales, respond to civic and learning needs.

The project radically redistributes the polarities of the intervention. Compared to the first degree proposal, the body to the north has been moved to the border, so as to create a single open space on the front of the entrance.

SCHOOL AS A PLACE TO LIVE

The building is enveloped in a welcoming wooden shell, capable of both welcoming and opening outwards, offering new spaces and opportunities for interaction between school and civic practices. The shell is a soft, flexible and interactive shell.

Inside, the functions of the ground floor - canteen, auditorium and library - overlook the hourglass-shaped square, favouring an osmotic movement both during school hours and when open to the public.

SUSTAINABILITY AS AN EDUCATIONAL TOOL

The technical and energetic renovation of the gym becomes an opportunity to transform the building into the new energy engine of the entire school complex. The hypothesis foresees an intervention of structural consolidation: 1) Intervention on the trusses/roofs nodes in the roof with connections that prevent the reciprocal sliding 2) Integration of the anchors of the perimeter panels at the top and at the base 3) Consolidation of the pillars increasing the resistant section for a partial height.

The production of heat transfer fluids is ensured by a four-pipe helium-assisted heat pump system and by a backup system consisting of an air-cooled heat pump. The helium-assisted heat pumps (which also produce domestic hot water) use a condensation tank made up of underground tanks at decreasing temperatures, capable of storing the thermal energy produced by a system of hybrid solar panels placed on the roof. The heat pumps are powered by exploiting the production of electricity from the field on the roof. The water heated in the underground storage tanks is integrated through the exploitation of rainwater after treatment of decantation and filtration.

A system with very high energy performance able to maximize the overall efficiency of the complex building-system and reduce electricity consumption.

The basement partitions, suitably waterproofed and insulated, offer the opportunity to act as an inertial storage for both the summer and winter periods, differentiating the temperatures for each tank and connecting the thermal storage tank with the solar thermal panels and heat pumps (powered by photovoltaics).

All above ground structures are made of self-supporting multilayer blocks without glue and metal systems (beyond the first deck). The preferred solution is a slab partition solution that is equivalent to a prefabricated system, with a considerable reduction in construction time. Each wooden element is produced according to a series of specific processing data, without adaptation on site. The stratigraphy of the walls provides natural insulation with environmental certification.

The classrooms are never facing south to avoid the phenomena of glare during work at the tables and eliminate or reduce in the afternoon overheating phenomena due to direct sunlight.
Garden roofs contribute to the protection of the roofs from summer overheating, filter rainwater, absorb dust and Co2 during the daytime period. In general, the bioclimatic approach related to the general compositional choices has governed both the image and the functioning of the facade layer.
A technical system in treated wood built
on a uniform grid that adapts to the different
needs of functions and orientations.

FREEDOM AND AUTONOMY OF THE STUDENT

A MOBILE AND INTERACTIVE WALL

The classrooms are communicating with each other and with the corridor. The system of orthogonal load-bearing partitions is open on the adjacent sides so as to allow, even in a wooden structure, the complete communication of the classroom spaces - corridors - laboratories.
The classrooms are internally organised to guarantee traditional frontal lessons but, thanks to a mobile wall on the side of the corridor, they can quickly become informal, interactive and multimedia learning spaces.
The shifting of the wall modulates the internal surface of the ALP, extending the portion of the corridor so as to make it a true educational space. Thanks to this element and to the walls that can be opened between the classrooms, it is possible to define flexible spaces (both in terms of surface area and use) inside the classrooms and corridors. 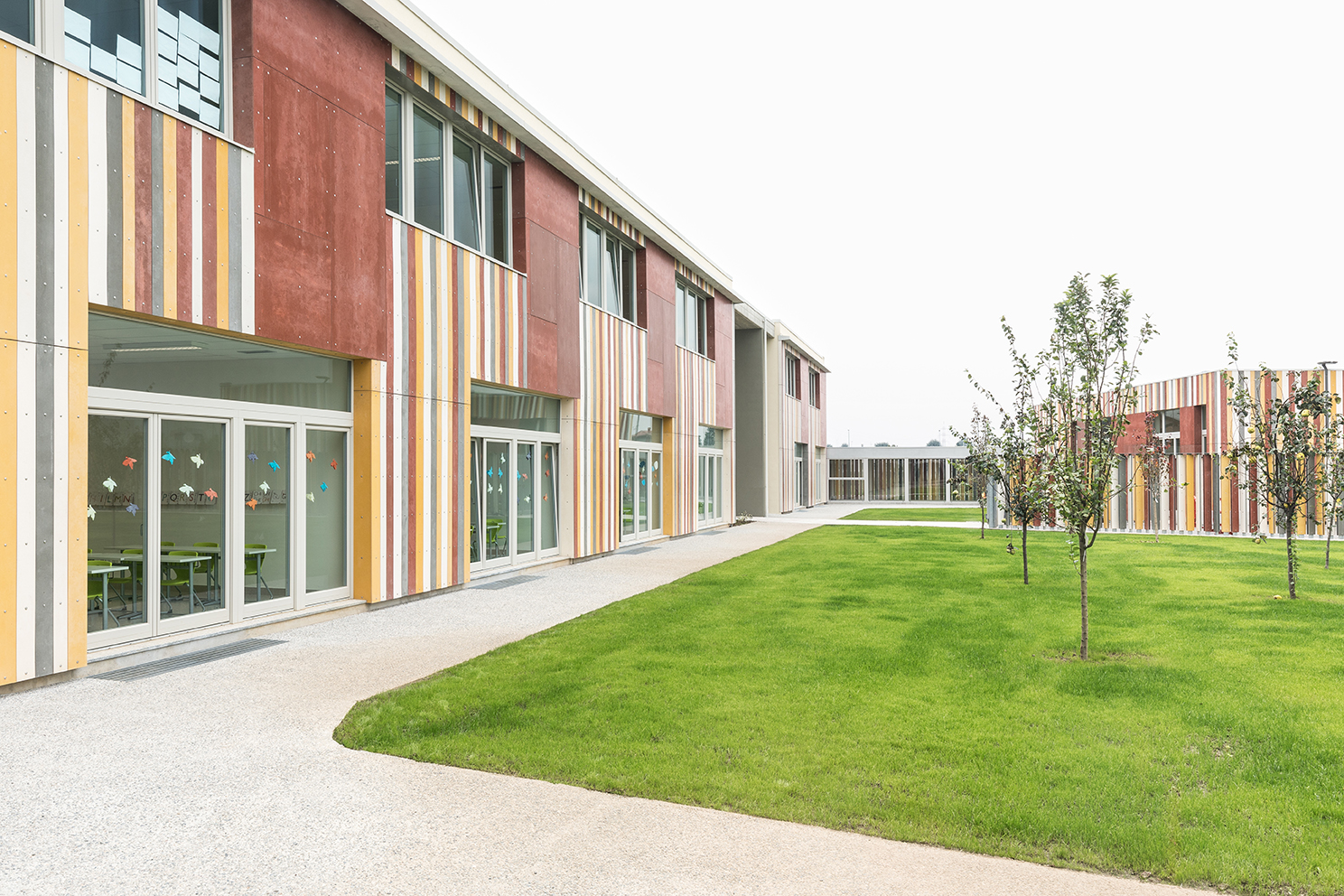 The ambivalent nature of the place, facing at the same… 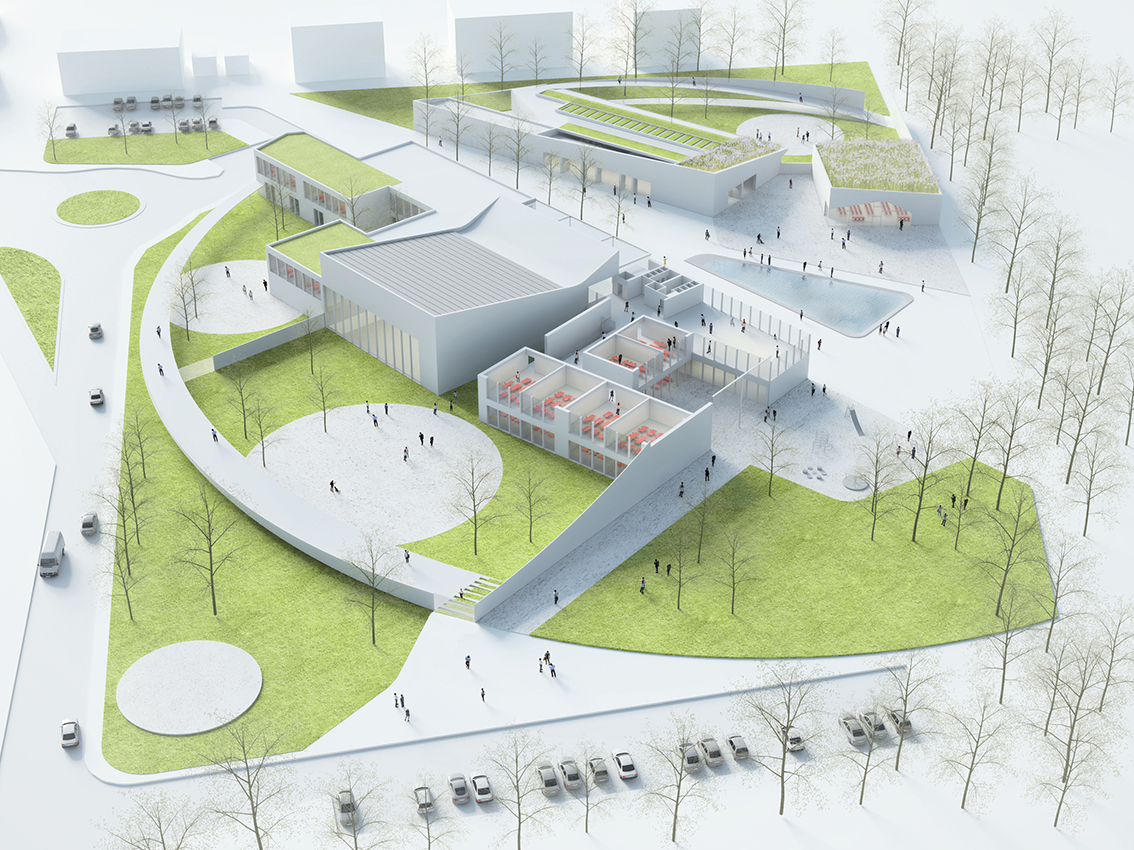 Building a school today means to prefigure a space that… 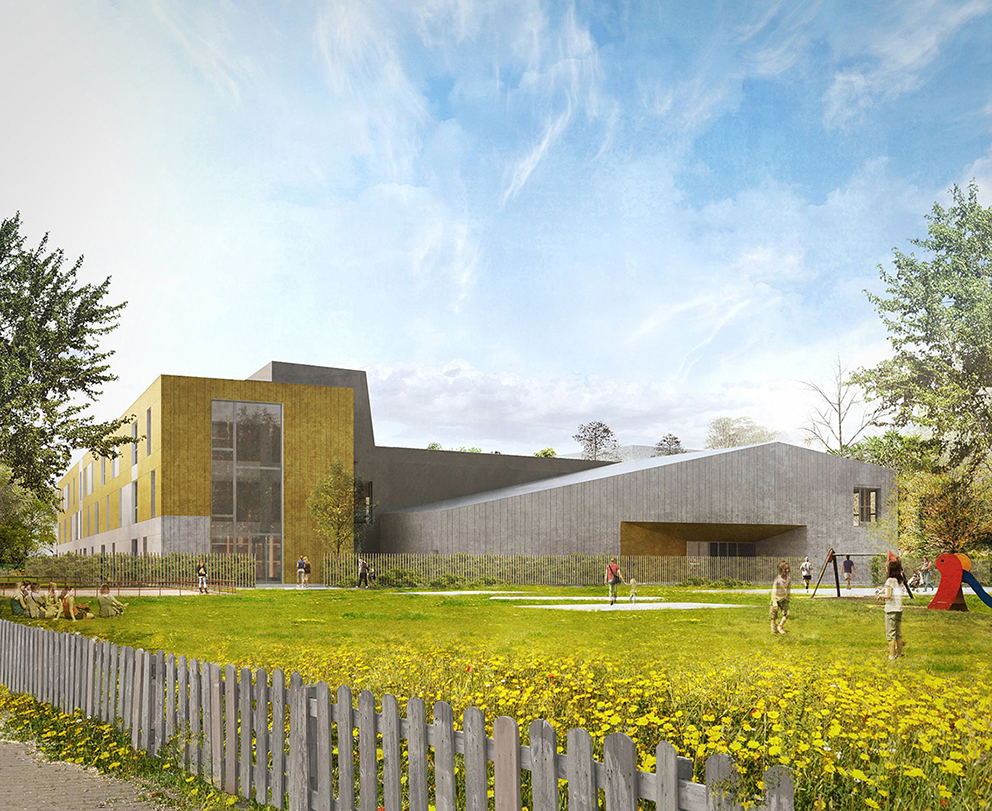 Secondary School in via Strozzi

The school is configured with a mainly linear development,… 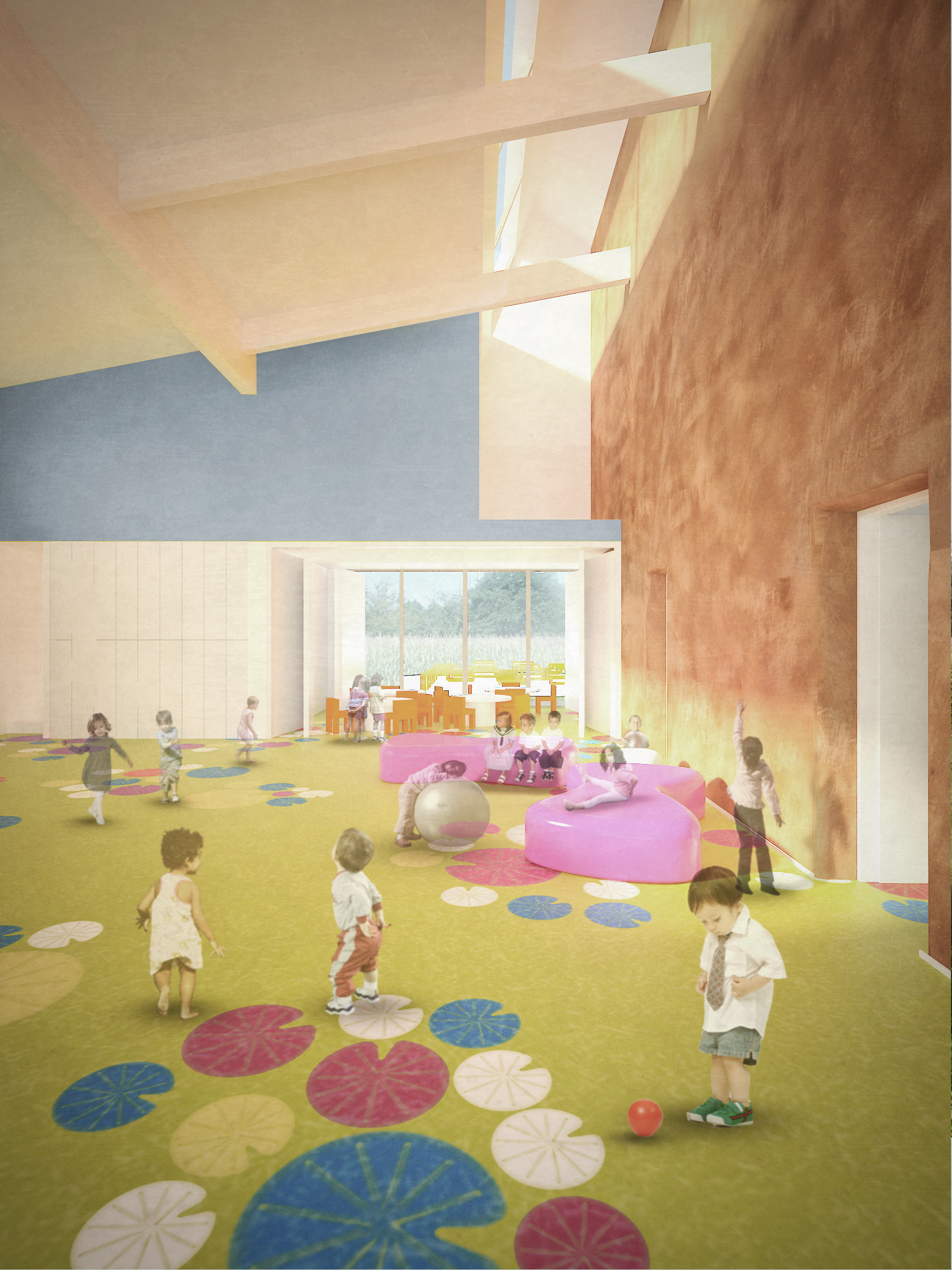 The building has been thought as an indipendent pavilion… 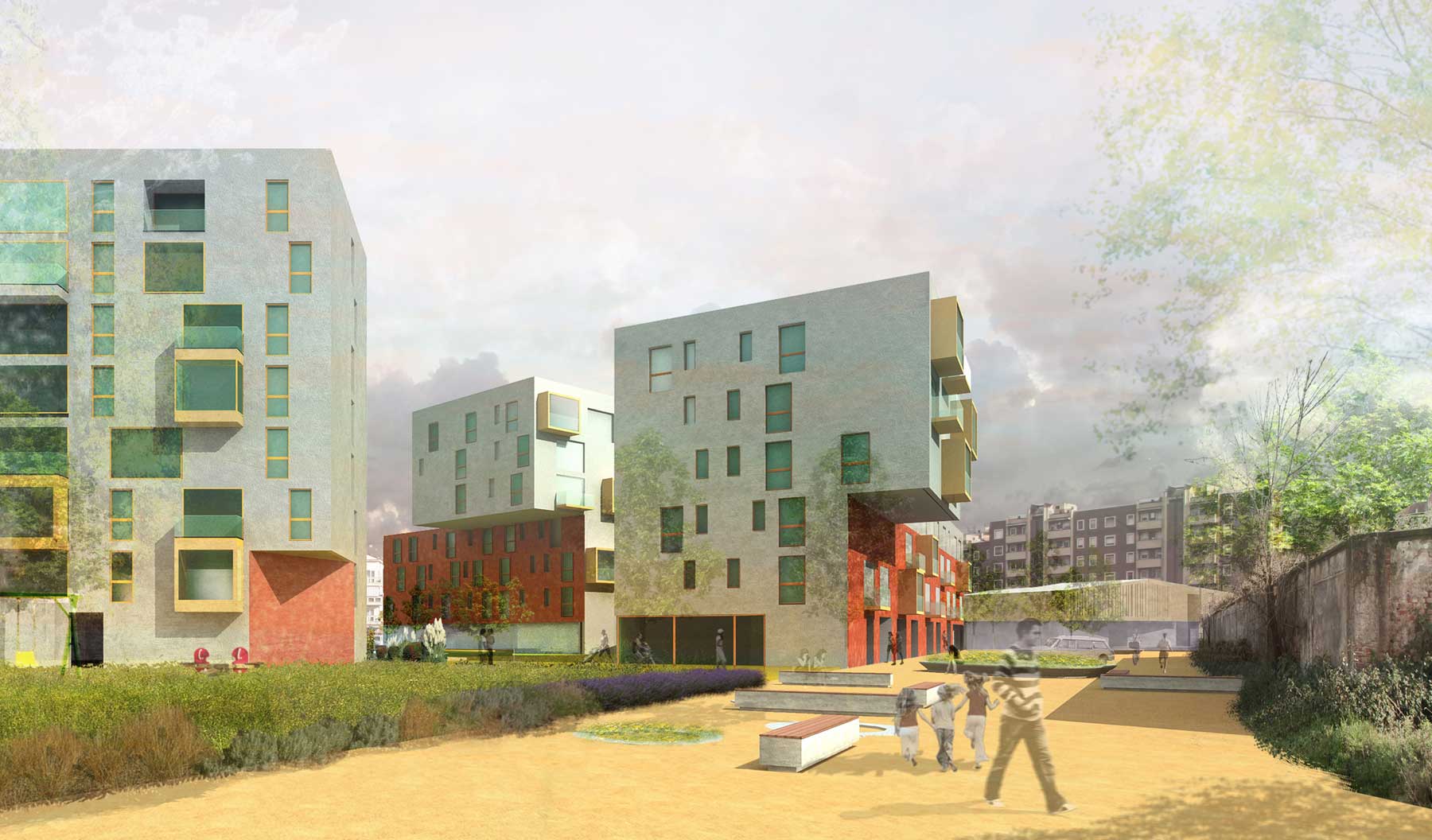 A community to grow

The project comes from the desire to build places able…